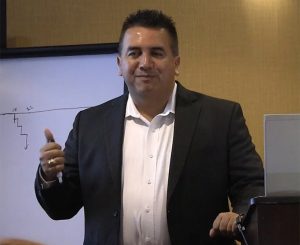 Alex Barron was born in El Paso, TX and was raised in Juarez, Mexico and El Paso, Texas. He graduated in 1995 from the University of Texas at El Paso (UTEP) with a 4.0 GPA in Civil Engineering. He attended Stanford University from 1996-2001 to pursue graduate studies in Structural Engineering and Construction Management.

Mr. Barron has been studying the subject of money, wealth, and personal finance over the last 20 years. At the age of 21, he attended a seminar entitled «Success» by Mr. Peter Daniels, a rags to riches multi-millionaire from Australia, which set him on the path to find the formula by which any person could succeed financially and reach their life goals. Since his early 20’s he developed an interest in investments and has been investing in the stock market since the late 1990’s. At the age of 26, he worked with successful venture capitalists and entrepreneurs while at Stanford.

After finishing his graduate studies at Stanford University, Mr. Barron began his Wall Street career in 2001 in the real estate team at Franklin Templeton focused on the housing sector. He has distinguished himself in his career by becoming the leading housing analyst in the nation who accurately predicted the rise of the housing market from 2001-2005, the housing bubble crash in early 2006 as well as the bottom and recovery of the housing market to the day in 2011. Through his independent sell-side research firm Housing Research Center LLC, he has become the leading source of information on the housing market and the publicly traded builders for institutional investors.

Over the last few years, he has become active in the community, serving as an Advisory Board Member for the UTEP College of Engineering, and has served as Founder and President of Dare to Dream Foundation, Options 12 Investment Club, and Financial Freedom & Success Institute.

He is a committed Christian. He loves to travel worldwide and has visited 30 countries over the last 20 years. His passion is to teach the subject of Financial Freedom and his goal is to help over 1 million people become debt free over the next decade to enjoy an abundant life. He wants to motivate people to become millionaires with the goal of making a difference in this world through their giving. His foundation is dedicated to helping poor children around the world receive an education to develop them into the leaders of tomorrow. He believes compassionate capitalism is the best economic philosophy. He believes in individual liberty, personal responsibility, free enterprise, and equal opportunity for all. He believes that any dream or goal in life is possible and that the only limits are those we set on ourselves or allow others to set on us. His life motto is «Dare to Dream».